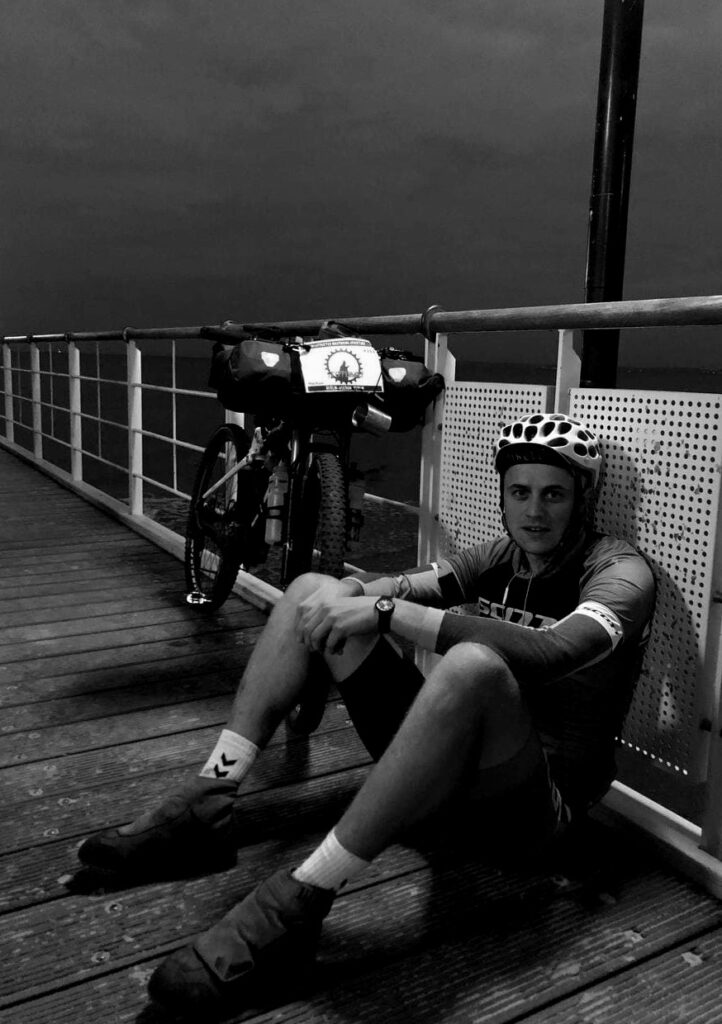 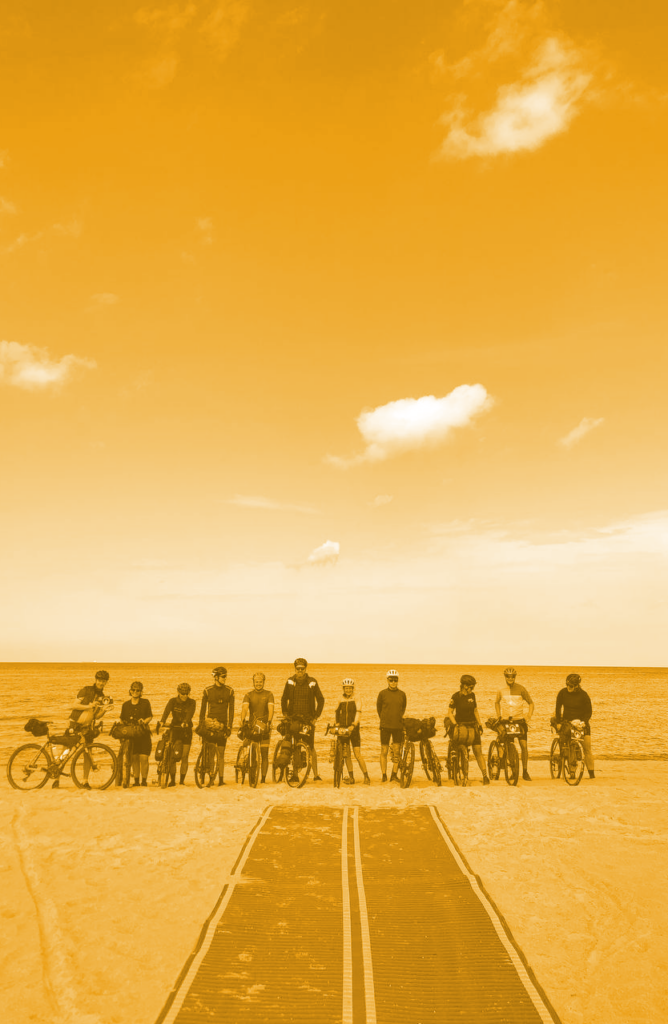 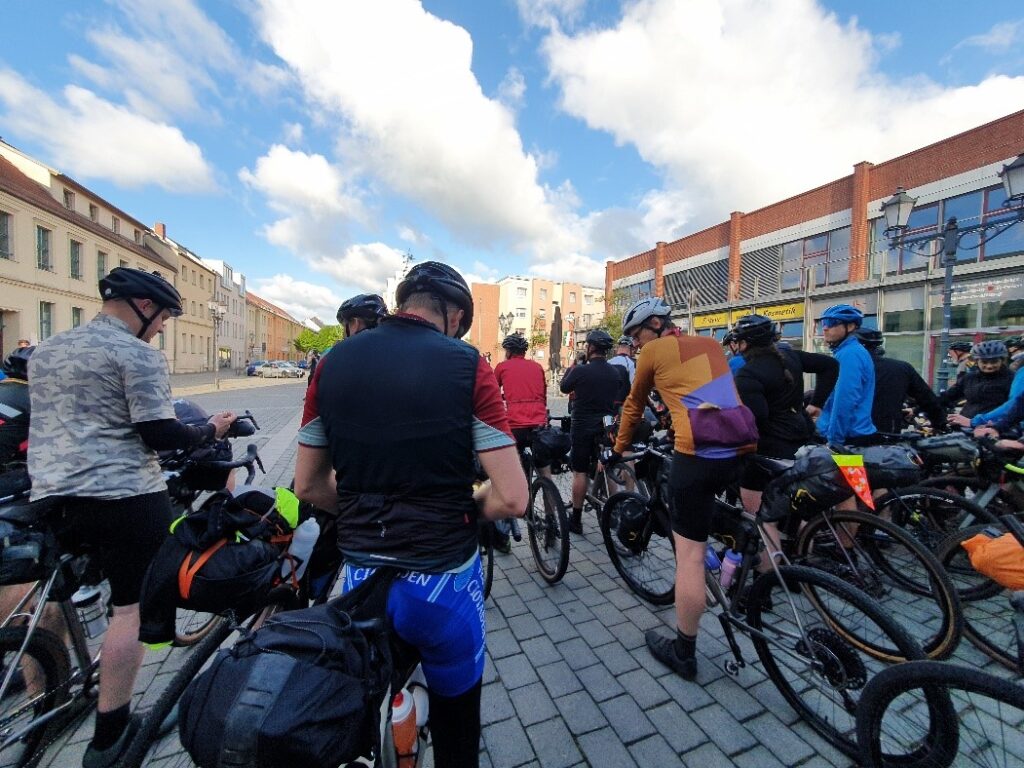 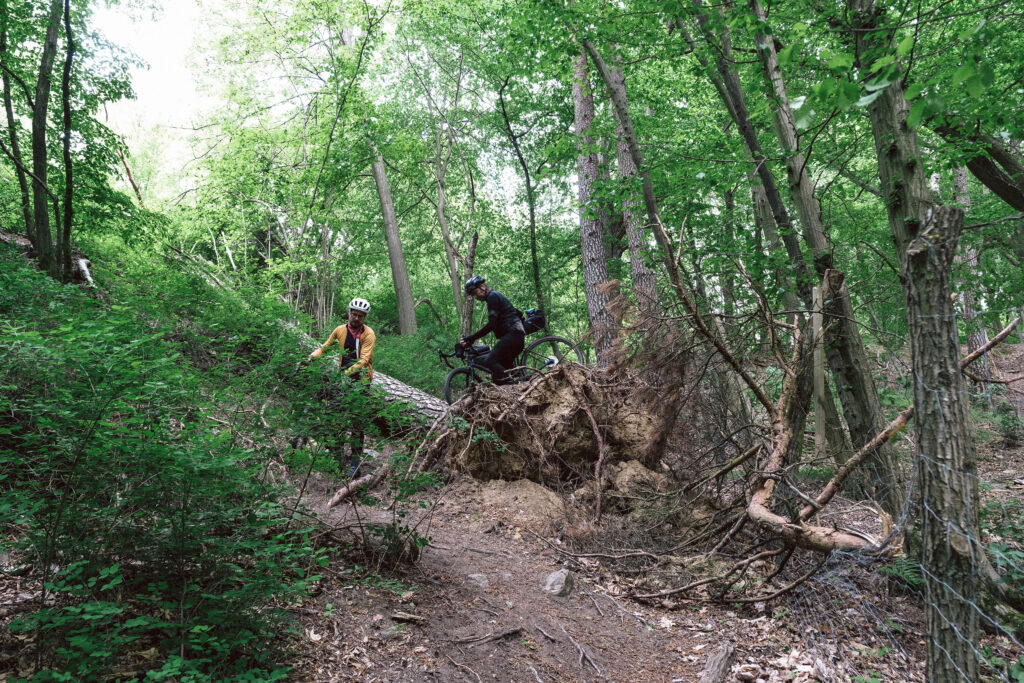 Days that should never end

At midnight on Wednesday, the #Steppenwolf22 officially ended. Seven days that flew by for us. A week in a parallel universe where there is only sand, plate roads, trails, great people, campfires, rape fields, steep hills and cold lakes.

DAY 1
Already the start was surreal for us. In our second year, we stood Thursday at half past seven already with 95 Steppenwolfs in front of the ice cream factory in Bernau. We were happy to see some familiar faces and many new ones. Some came by train from Berlin, others by long-distance train from the German Wine Route, the Alps or Slovakia. At eight o'clock sharp we started at the historic Steintor. The first three kilometers we covered together on asphalt, before the first trail came. Here also the ways of short and wild track separated. Smaller and larger groups formed and so we swept over the trails at the Werbellinsee and through the Schorfheide. While the wild track meandered along the Templin, Lychner and Feldberger lakes, the short track headed towards Oberuckersee through the hills of the Uckermark. Shortly before 2 p.m. the first short track starters arrived at Checkpoint I after 120 km. For all others there was pasta later, also for the wildtrack riders, who arrived after 178 km and almost as many cross lying trees only with the night. At the campfire the stories of the first day were exchanged, while the fastest still got the last ferry to the island. At 7pm the first five finally reached the Baltic Sea as the lead group on the short track and at 9:30pm they too ended the day after 255km at the 2nd checkpoint. While most of them crawled into their sleeping bags, a few continued to ride through the night on the wild track.

At five o'clock in the morning, just in time for sunrise finally reached also the first on the Wildtrack after 338 hard kilometers. From the CP I it went for them from the Tollensesee via Neubrandenburg through the beautiful Tollensetal, where the paths are mostly flat but deep. Except for a few abandonments due to ruptured brake tubes, inflamed nerves, too narrow tires (27 mm) or knee pain, most of the short tracker riders started from CPI and CPII. The big peloton started after a breakfast in Strasburg into the Brohmer Berge and reached the ferry to the island around noon. There a bit of rain was waiting, but the Baltic Sea welcomed most with sunshine. Meanwhile, the leading group had taken the first ferry at 8:30. On time at noon they reached CP III at Hopsis Radlerglück. Also on the Wildtrack the field was already very long. At 09:00 in the morning Hannes was the first to reach the second CP, while Elke and Thomas reached the first CP in the evening. But at the checkpoints riders came together again and again. So over 30 riders stayed happy and exhausted at the 2nd checkpoint, the last meters through the beautiful but also sandy hinterland of the island has demanded a lot of them. While they strengthened themselves with vegan risotto, Robby reached the finish in Bernau at 20:37 as the first on the short track, closely followed by four companions. And for some Wildtrackler:innen it went into the second night without or with short sleep.

DAY 3
No rain, but a gray morning. Ramon will not have cared, shortly before sunrise at 04:56 am he was the first on the Wildtrack to pass the stone gate in Bernau after less than 45 hours. At 7:40 am Michael followed, two hours later the third, Hannes from Rostock. Meanwhile, most of the short track peloton had to hurry to reach the first two ferries down from the island. The way there led not only over the white mountain but also over a dike path, against which cobblestones seem like whispering asphalt. Except for Thomas and Elke, everyone left the island by noon. Behind Usedom it went first once on Gucci Gravel along the Haff, before both tracks separated again. The short track led via Torgelow and Pasewalk always through the valley of the Uecker, the wind played along. On the Wildtrack it also went faster after the coastal trails on Usedom, over the Helpter mountains the way led through the cobblestone hell of Strasburg. In the afternoon the sky cleared and the evening sun gave everyone new energy. While the first riders of the "peloton" arrived at CP III, Marei was the first woman to reach the finish in Bernau at 2 pm. The majority of the riders spent the last night at Hopsis Radlerglück among sheep and pigs, another part at a lake just before Angermünde.

A third of the starters had already crossed the finish line, but the majority set off for the last kilometers to Bernau on Sunday. From the last checkpoint it was really challenging for everyone. Wildtrack and shorttrack often met here and so the scattered field moved together. At Unteruckersee came the first fantastic trail, then it went into the forest to the historic center of Angermünde. The hardest part came now: In the best Sunday weather it went through the Chorin cobblestone forest and after many had a snack at the Schiffshebewerk, the trail led either to the Märkische Bergwanderweg (Wildtrack) or to the 66-lake hiking trail (Shorttrack). After a few kilometers of trail, an incredibly steep hill suddenly appeared. At the top, almost everyone first assumed that they were wrong, but the path led for a few meters over the railroad tracks of the bicycle trolley line. On the way to Werneuchen waited a few more obstacles, but then it was done for all. The main peloton of the Steppenwolf rolled on plate roads under the setting sun to Bernau. There, not only a delicious ice cream and the last stamp were waiting, but also a lot of other finishers. Until late in the evening we sat together in front of the Alte Post. When it was already dark, the impressive narrow tire fraction also reached the finish. Christine and Lena were on the short track with panniers and 32 mm, Lucas on the wild track with 35 mm. Incredible how they made it through the Usedom sand and over the trails. At midnight, the finish closed its doors.

….
DAY 7
A special chapter of the Steppenwolf was written by two riders on the Wildtrack. Elke took seven days from the beginning, on Wednesday she reached the finish in Bernau shortly after half past seven and was the first woman ever to finish the Wildtrack. Thomas had fallen ill in between. He spent two days in the woods to recover a little before resuming the ride. At midnight the time limit ended, around 10 pm he also reached the Bernauer Steintor and got the last stamp. This was the final end of the Steppenwolf22. 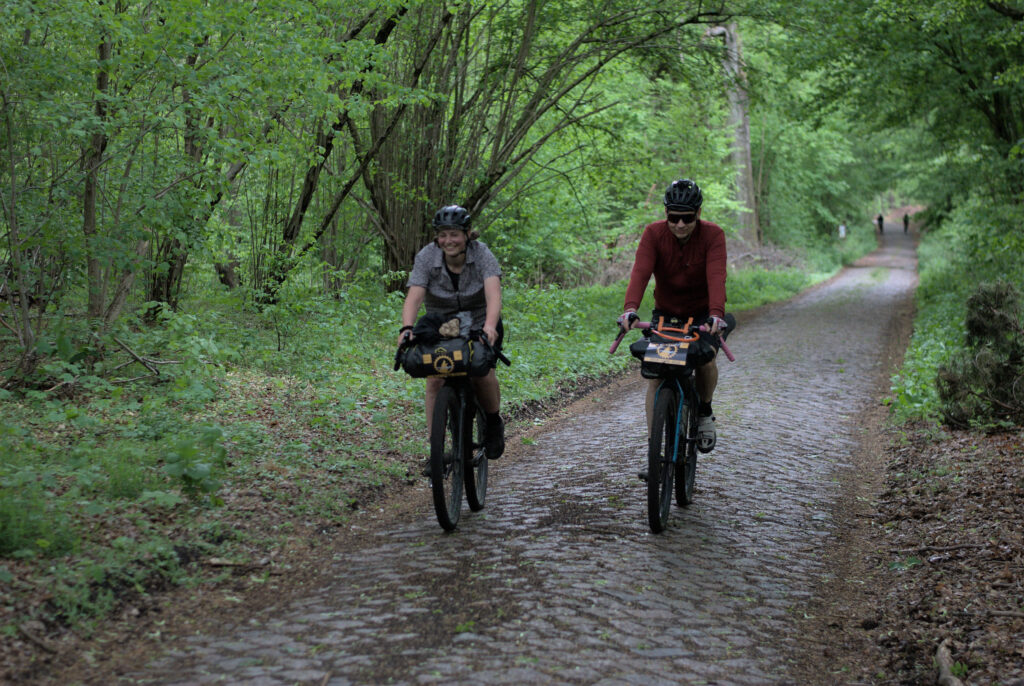 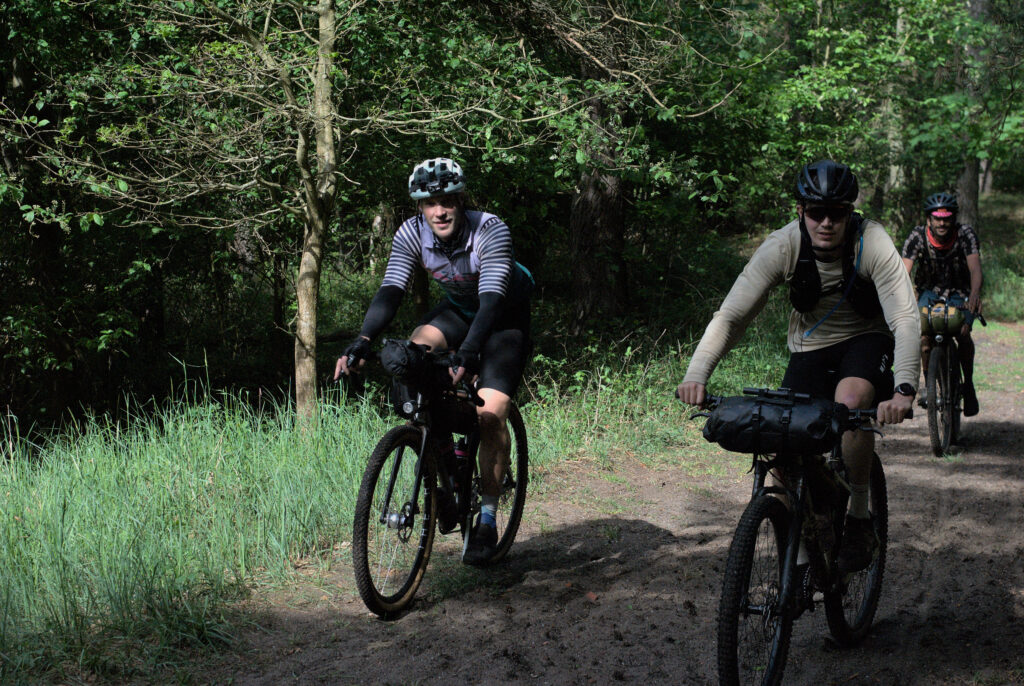 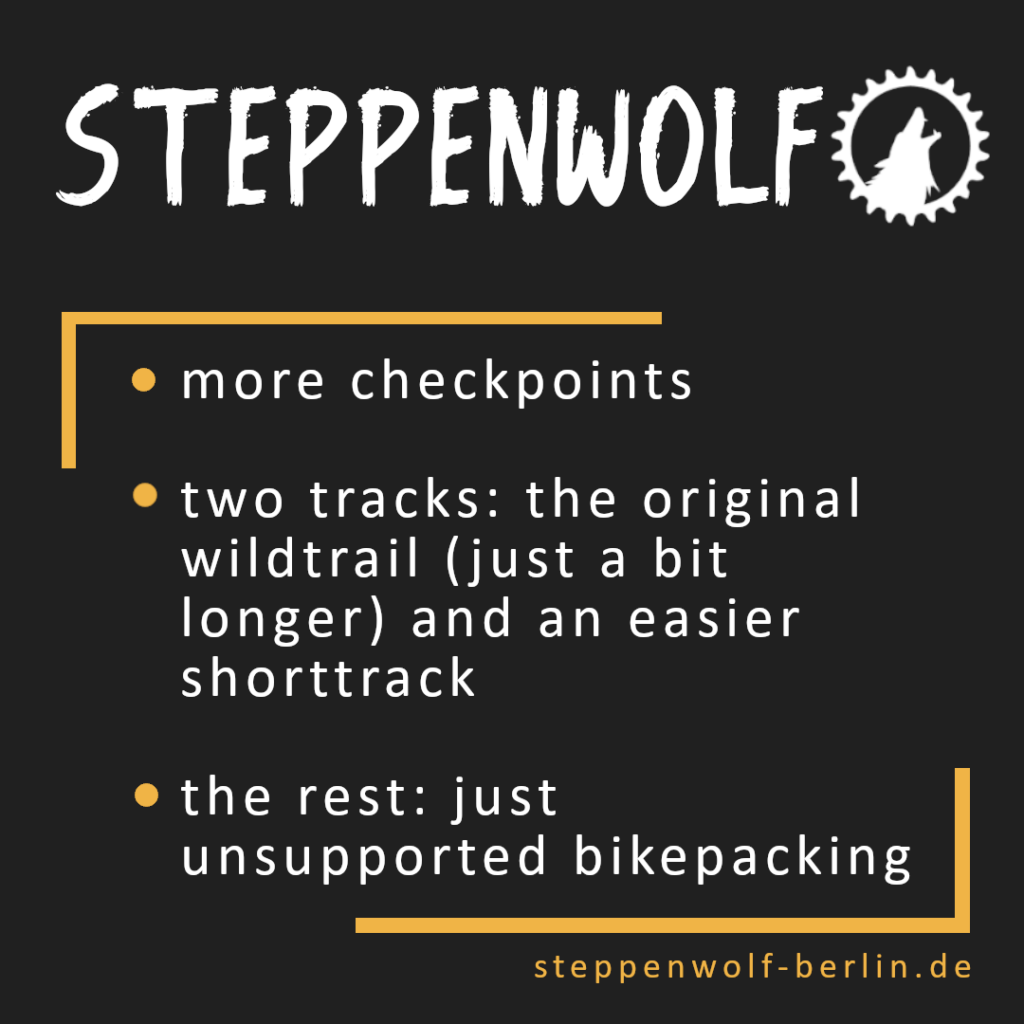 In less then a month we will open registration for #Steppenwolf22. Time to introduce our concept for next year!

The premiere of Steppenwolf this year was an incredibly beautiful experience for us! We really had a lot of fun with all of you and that remains the most important thing for us. That's why there is no reason for us to change anything in the basics: Our codex, ethos (some lovingly call it a pamphlet) and the basic direction of the route remain the same. We want to establish the Steppenwolf as an unsupported bikepacking challenge between Berlin and Usedom, as a wild and solidary ride from the metropolis to the sea and back.

The only point where we would like to change something is the lack of diversity in our starting field. The Steppenwolf should be for everyone, so we want to make it possible for more riders to join. That's why there will be two routes next year: The Wildtrack, which will challenge all riders over 700 km with root trails, short ramps and pavé, and the easier Shorttrack over 500 km, which leaves out technical trails, rolls a bit better and can score with two ferry rides.

Whether you finish the Steppenwolf22 in 48 hours or seven days is completely up to you. However, since it is dangerous for different people to bivy wildly, we have organized three checkpoints tailored to the short track, where you can bivy safely if necessary. They divide the shorttrack into four stages from 105 to 130 km long. This is also where the wild track and the short track meet, so there is a chance to meet other riders around the campfire.

We are very happy to have already found three suitable and beautiful places for this! Don't expect much more than a soft meadow, a bath and running water, we want to keep the character of bikepacking.

In the next few days we will publish details about the tracks, the registration and everything around it. Feel free to contact us if you have any questions! Otherwise: See you soon in the steppe!

Save the date: Today we have announced the date for the second edition. Steppenwolf 2022 will take place from May 12-15. We will keep some things like start and finish in Bernau, as well as the most beautiful parts of the route. But there will also be some news. Besides the original "wild track" - which will remain at 650-700 km and just as challenging - there will be an easier "short track" over 450-500 km. This way we want to make the Steppenwolf accessible to more riders. For this we will scout some new routes in the next weeks. Stay tuned! 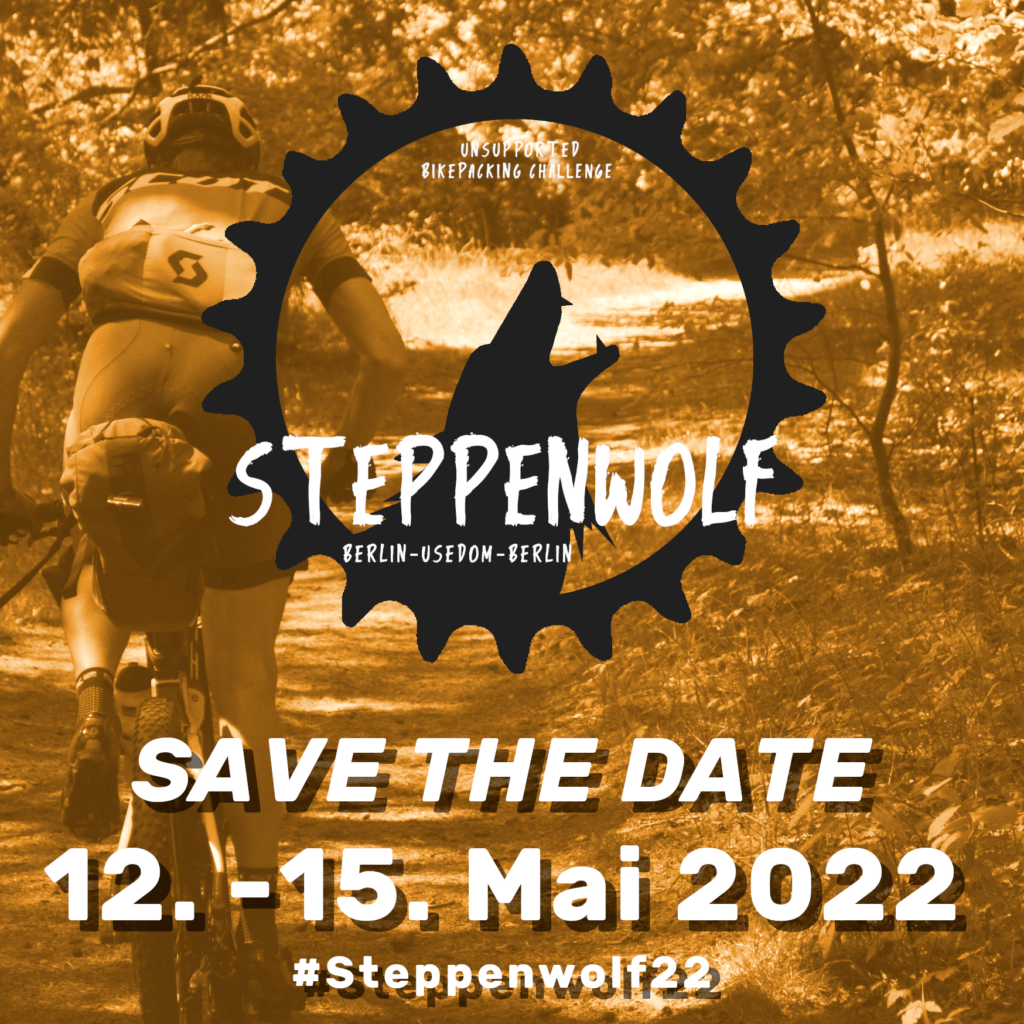 Today Gerhard W., the last rider of the Steppenwolf premiere, crossed the finish line - and was one of only 11 finishers. This is the official end of the Steppenwolf. It was a wonderful premiere, where almost everyone got their money's worth in different ways. What it was for all 30 starters: A pretty tough one! Starting with the "Märkischer Bergwanderweg" over the cobblestones of Chorin and Strasburg, over the headwind before and behind Usedom to the endless root trails from Feldberg. We already knew the track was tough, but some underestimated the Brandenburg Ice Age landscape. Nevertheless, the fastest tempo bolters made it to Bernau in under 48 h, a total of seches Fahrer*innen reached by Saturday evening already the Eismanufaktur in Bernau. Others enjoyed the landscape and - if there were any - the local specialties along the way. A total of 12 starters had to stop early due to damage (derailleur hanger, navigation, broken rim) or physical reasons (knee, fall into a drainage ditch, exhaustion). Nevertheless we had a great time with all of you at the different stops and the checkpoint on Usedom.

Soon one or two reports from riders will also appear here. We only have to say thank you to all helpers, to SpotWalla, to the ice cream factory "Alte Post" in Bernau and also to all starters for the good cooperation! See you again next year! 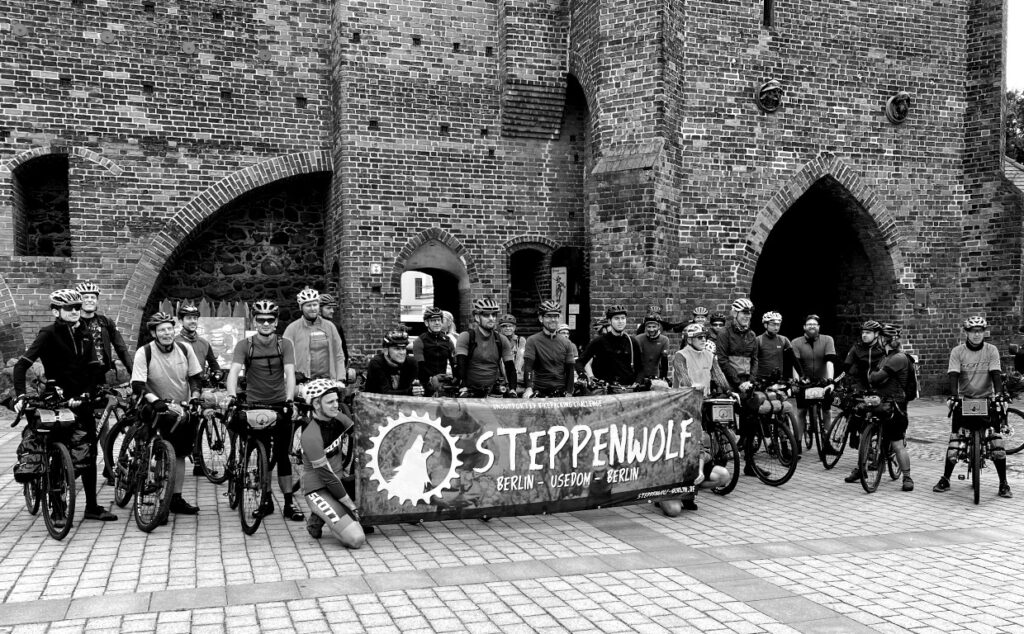 The route is scouted, the final preparations are underway and already almost 50 people are registered for the premiere of the Steppenwolf! We are ready and incredibly looking forward to the adventure.

Currently we are still tinkering with the roadbook, have banners printed and are preparing the start and finish location in Bernau. At the latest two weeks before the start you should get all information from us by mail.

Because we keep getting questions about the choice of wheel and tire width: The Steppenwolf is not a walk in the park. Due to the relatively dry summer, there will be some short pushing passages with under 40 mm, in addition, the trails around Bad Freienwalde, on the steep coast of Usedom and around Feldberg are not to be underestimated. The whole thing is rounded off with a few excellent pavé sections where you are happy about any comfort. We are excited to see which bikes we can welcome you with on September 23rd! 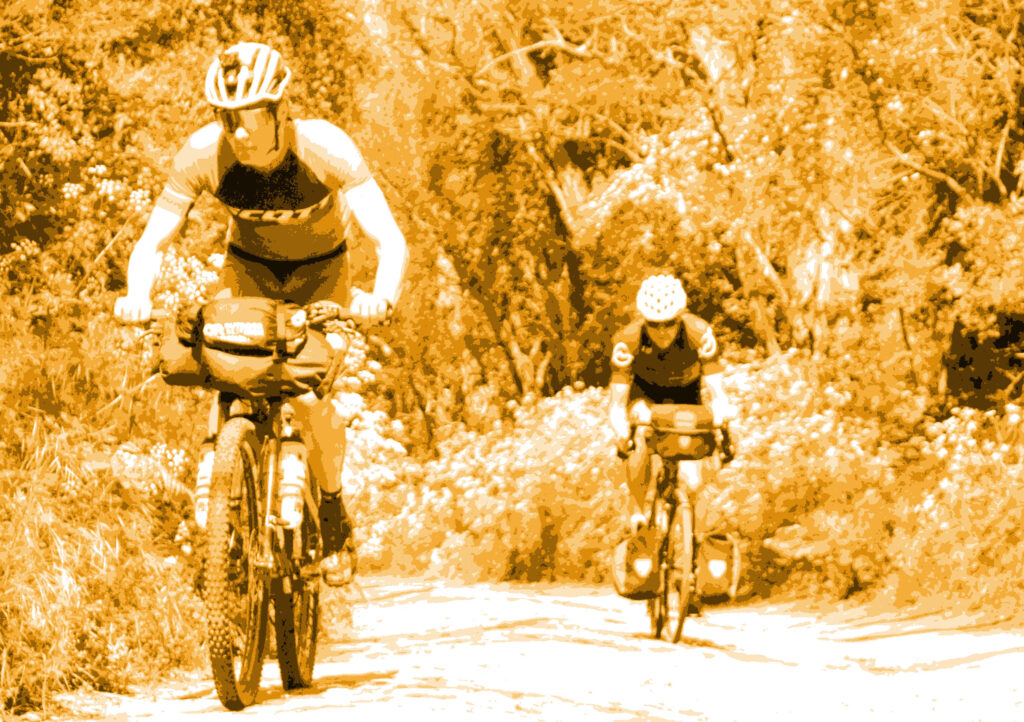